Last year, some fascinating new stories were released and the LFHS library is filled with books you may have run out of time to discover in 2017. Check out this trio of tales from some favorite authors:

Landscape with Invisible Hand by M.T. Anderson
“When the vuvv first landed, it came as a surprise to aspiring artist Adam and the rest of planet Earth – but not necessarily an unwelcome one. Can it really be called an invasion when the vuvv generously offered free advanced technology and cures for every illness imaginable? As it turns out, yes. With his parents’ jobs replaced by alien tech and no money for food, clean water, or the vuvv’s miraculous medicine, Adam and his girlfriend, Chloe, have to get creative to survive…”

Long Way Down by Jason Reynolds

“Or, you can call it a gun. That’s what fifteen-year-old Will has shoved in the back waistband of his jeans. See, his brother Shawn was just murdered. And Will knows the rules. No crying. No snitching. Revenge. That’s where Will’s now heading, with that gun shoved in the back waistband of his jeans, the gun that was his brother’s gun. He gets on the elevator, seventh floor, stoked. He knows who he’s after. Or does he? As the elevator stops on the sixth floor, on comes Buck. Buck, Will finds out, is who gave Shawn the gun before Will took the gun. Buck tells Will to check that the gun is even loaded. And that’s when Will sees that one bullet is missing. And the only one who could have fired Shawn’s gun was Shawn. Huh… BUCK IS DEAD. But Buck’s in the elevator?”

Check out the rest of the Goodreads’ review here.

“Struggling to make ends meet, teenage hacker Emika Chen works as a bounty hunter, tracking down players who bet on the game illegally. But the bounty hunting world is a competitive one, and survival has not been easy. Needing to make some quick cash, Emika takes a risk and hacks into the opening game of the international Warcross Championships—only to accidentally glitch herself into the action and become an overnight sensation.

Convinced she’s going to be arrested, Emika is shocked when instead she gets a call from the game’s creator, the elusive young billionaire Hideo Tanaka, with an irresistible offer. He needs a spy on the inside of this year’s tournament in order to uncover a security problem . . . and he wants Emika for the job.“

Those able to attend the author visit this month were treated to something extraordinary. Caitlin Alifirenka visited LFHS on October 18 and shared the true story of how one class assignment changed the course of her life. She also made LFHS students an interesting offer.

Here’s part of her story. In 7th grade, Caitlin’s teacher announced it was the final year of the pen-pal project and that every student in the class must pick a country they’d be interested in sending a letter to. Her interest was peaked, and wanting to break with convention, Caitlin picked the last country on the list, Zimbabwe, and her adventure began. In Africa, Martin Ganda received her letter because he was the smartest student in his class of 50, and when he responded, their friendship over the years across thousands of miles – and who knows how many letters – impacted their lives and steered them both in completely awesome directions.

Caitlin and Martin wrote the book I Will Always Write Back with the help of Liz Welch, sharing the actual letters they sent each other and telling the rest of their story. Caitlin offered to match LFHS students, based on age, with international students in Thailand and Zimbabwe but made it known that our students would have to initiate the letter writing. She shared how the kindness that developed between her and Martin became contagious, the theme of her talk:  Kindness is Contagious.

Are you up for the adventure?

Here’s Caitlin signing our author wall in the Silent Study Room as well as Martin and Caitlin’s podcast by PW KidsCast. You can also check out their book from our library.

Good morning, Scouts! Cinda Williams Chima’s visit is closing in fast! We’re excited to announce her schedule for the day.

If you need to be excused from class to attend any of the events, come pick up a field trip form at the library circulation desk!

We’re also selling copies of Cinda’s books for those students who want to get them signed.

We hope you enjoyed today’s late start. We’ve got a special treat today–Cate Tiernan, the NYT Bestselling author of Immortal Beloved trilogy, has stopped by our blog for a one-on-one interview!  Cate is just as fun as her heroine Nastasya, and we had so much fun coming up with questions for her.

I was born in New Orleans, LA, in 1961. New Orleans is one of the most interesting American cities, and it has an incredibly rich and exotic culture that had a profound influence on me. Kids in other cities have lemonade stands; we sold voodoo gris-gris and made wax dolls in the likenesses of our enemies.

The first book in the series, Immortal Beloved, is the best paranormal we’ve read in a long time, with a sarcastic heroine who’s too jaded for happiness and her struggle wit hlearning to live with everything she’s done in her long, long life–but we won’t spoil the adventure for you. You’ll have to pick up the book!

Nastasya has spent the last century living as a spoiled, drugged-out party girl. She feels nothing and cares for no one. But when she witnesses her best friend, a Dark Immortal, torture a human, she realizes something’s got to change. She seeks refuge at a rehab for wayward immortals, where she meets the gorgeous, undeniably sexy Reyn, who seems inexplicably linked to her past.

Nastasya finally begins to deal with life, and even feels safe–until the night she learns that someone wants her dead.

We want to thank Cate so much for taking the time to chat with us! With the Immortal Beloved Trilogy over, can you tell us a little bit about what you’re working on now? 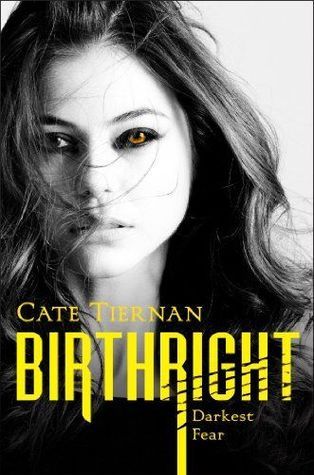 Cate: I’m in the middle of a new trilogy called Birthright. The first book, Darkest Fear, came out last January. It explores a new world for me–the world of shapeshifters! And of course it’s about a girl learning how to accept all the facets of her persona.

Haha, those are perfect! Nastasya is a train wreck, poor thing. You’ve got an amazing worldbuilding in Immortal Beloved–with organic homesteading and magick and Nasty’s flashbacks into her long life globe-trotting. What kind of research did you have to do for this series?

Cate: Oh my gosh. So much research. Massachusetts weather at all times of the year. What trees are there. Lots and lots and lots of history–Icelandic history, Mongol history,. The geological makeup of the Russian steppes, medieval buildings and roads, means of transport through the ages, how castles are made, French fashion of the 1700s, the oil boom in Texas in the 1950’s, slang through the ages, what kind of cars would be in France in the 1930’s, what kind of fabric was available in Sweden in the 1700s, various disasters and other pertinent cultural references, how weapons are made. And a lot of other topics also. So. Much. Research. END_OF_DOCUMENT_TOKEN_TO_BE_REPLACED

Interested in writing a novel this November? NaNoWriMo is all about cranking out that first draft, and the Young Writers Program is designed specifically with students in mind!

700,000 writers and authors come together to inspire, motivate, and commiserate about writing.

If writing 50,000 words in one month is your kind of crazy, sign on up. It’s all about silencing your inner editor, figuring out long plots, and finishing that first draft. END_OF_DOCUMENT_TOKEN_TO_BE_REPLACED