“When I’m reading this book it is hard for me to put it down,” says Rachel, class of  2020 . Her favorite book is Harry Potter and the Prisoner of Azkaban, the third book in the series by J.K. Rowling. 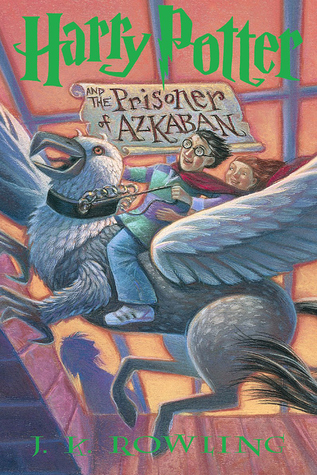 “Harry Potter’s third year at Hogwarts is full of new dangers. A convicted murderer, Sirius Black, has broken out of Azkaban prison, and it seems he’s after Harry. Now Hogwarts is being patrolled by the dementors, the Azkaban guards who are hunting Sirius. But Harry can’t imagine that Sirius or, for that matter, the evil Lord Voldemort could be more frightening than the dementors themselves, who have the terrible power to fill anyone they come across with aching loneliness and despair…”

Read the full review at Goodreads.com.

While book series are fun, let’s be honest – they’re a big commitment. But what if one book just isn’t quite enough? Introducing duologies!

Here are a bunch of stories that come in pairs to keep your reading load more relaxed and your time commitment easy this semester:

Matt De La Peńa´s The Living and the sequel The Hunted follow the adventures of a high school student working on a cruise ship, trying to survive a tsunami, and much more.

Dash and Lily’s Book of Dares and The Twelve Days of Dash & Lily by Rachel Cohn and David Levithan, are two modern romance books by two authors, taking readers all across New York City during the “most wonderful time of the year.”

Elizabeth Wein has a pair of gripping World War II stories – one about a daring spy held as a prisoner of war, the other a pilot in a concentration camp – that are so well researched and written, it’s almost hard to believe that they’re fiction, Code Name Verity and A Rose Under Fire.

Time Salvager and Time Siege by Wesley Chu take readers on a time-traveling adventure series about a crew tasked with helping save the future by recovering resources from the past without altering the course of history.

A set of dystopian novels written by local author Erica O’Rourke, Dissonanceand Resonance explore the idea of parallel universes and the complex impacts even our smallest choices make.

The favorite book of English teacher Mrs. Zimmerman is Paul Kalanithi’s When Breath Becomes Air. “This book is beautifully written. It allows you into the mind of a brilliant surgeon, husband, and writer who combines all of these roles as he explains how he was a brilliant surgeon who advised cancer patients until he himself had cancer. It’s compelling and sad and joyous all at once.”

“At the age of thirty-six, on the verge of completing a decade’s worth of training as a neurosurgeon, Paul Kalanithi was diagnosed with stage IV lung cancer. One day he was a doctor treating the dying, and the next he was a patient struggling to live. And just like that, the future he and his wife had imagined evaporated. When Breath Becomes Air chronicles Kalanithi’s transformation from a naïve medical student “possessed,” as he wrote, “by the question of what, given that all organisms die, makes a virtuous and meaningful life” into a neurosurgeon at Stanford working in the brain, the most critical place for human identity, and finally into a patient and new father confronting his own mortality.

What makes life worth living in the face of death? What do you do when the future, no longer a ladder toward your goals in life, flattens out into a perpetual present?”

Now that finals are over, add something fresh, learn something new, and make 2018 the best year yet! Try something fun and consider becoming part of the LFHS Book Club, complete with the Varsity Reading Challenges. Meetings are usually twice a month with times before and after school.

Here are some recently published books that the “Varsity Reading Team” is discussing in 2018:

Book Club selections are available in the library one month beforehand. Have questions? Ask Librarian and club sponsor Ms. Fumarolo for more information or join our Schoology group!

The Five Stages of Andrew Brawley by Shaun David Hutchinson is a favorite of Olivia, LFHS Class of 2020.  “This book will emotionally destroy you, but you’ll love it nonetheless. It’s the saddest book I’ve ever read, but it’s my personal favorite book!”

“Andrew Brawley was supposed to die that night. His parents did, and so did his sister, but he survived. Now he lives in the hospital… Then one night Rusty is wheeled into the ER, burned on half his body by hateful classmates. His agony calls out to Drew like a beacon, pulling them both together through all their pain and grief…Death roams the hospital, searching for Drew, and now Rusty. Drew lost his family, but he refuses to lose Rusty, too…”

Read more about this book on Goodreads.

Last year, some fascinating new stories were released and the LFHS library is filled with books you may have run out of time to discover in 2017. Check out this trio of tales from some favorite authors:

Landscape with Invisible Hand by M.T. Anderson
“When the vuvv first landed, it came as a surprise to aspiring artist Adam and the rest of planet Earth – but not necessarily an unwelcome one. Can it really be called an invasion when the vuvv generously offered free advanced technology and cures for every illness imaginable? As it turns out, yes. With his parents’ jobs replaced by alien tech and no money for food, clean water, or the vuvv’s miraculous medicine, Adam and his girlfriend, Chloe, have to get creative to survive…”

Long Way Down by Jason Reynolds

“Or, you can call it a gun. That’s what fifteen-year-old Will has shoved in the back waistband of his jeans. See, his brother Shawn was just murdered. And Will knows the rules. No crying. No snitching. Revenge. That’s where Will’s now heading, with that gun shoved in the back waistband of his jeans, the gun that was his brother’s gun. He gets on the elevator, seventh floor, stoked. He knows who he’s after. Or does he? As the elevator stops on the sixth floor, on comes Buck. Buck, Will finds out, is who gave Shawn the gun before Will took the gun. Buck tells Will to check that the gun is even loaded. And that’s when Will sees that one bullet is missing. And the only one who could have fired Shawn’s gun was Shawn. Huh… BUCK IS DEAD. But Buck’s in the elevator?”

Check out the rest of the Goodreads’ review here.

“Struggling to make ends meet, teenage hacker Emika Chen works as a bounty hunter, tracking down players who bet on the game illegally. But the bounty hunting world is a competitive one, and survival has not been easy. Needing to make some quick cash, Emika takes a risk and hacks into the opening game of the international Warcross Championships—only to accidentally glitch herself into the action and become an overnight sensation.

Convinced she’s going to be arrested, Emika is shocked when instead she gets a call from the game’s creator, the elusive young billionaire Hideo Tanaka, with an irresistible offer. He needs a spy on the inside of this year’s tournament in order to uncover a security problem . . . and he wants Emika for the job.“

A new book grabbed the attention of Mr. Del Fava of the English Department, Sting-Ray Afternoons: A Memoir by Steve Rushin. He says, “It brought back so many memories of my childhood as the author and I grew up in the same era.”

“It’s a story of the 1970s. Of a road trip in a wood-paneled station wagon, with the kids in the way-back, singing along to the Steve Miller Band. Brothers waking up early on Saturday mornings for five consecutive hours of cartoons and advertising jingles that they’ll be humming all day. A father-one of 3M’s greatest and last eight-track-salesman fathers-traveling across the country on the brand-new Boeing 747, providing for his family but wanting nothing more than to get home…”

Read more about this book on Goodreads right here.